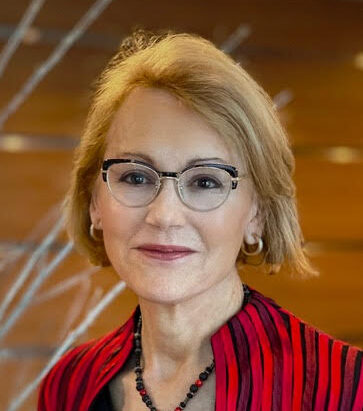 An international correspondent for over 20 years, Barbara lived in, and reported from, over 46 countries.  As a reporter she was based in Paris, France for 16 years, and London, England for 2 years before returning home to cover Washington, D.C.

During the Iraq War, Barbara was an embedded war correspondent with the U.S. Marine Corps, where she rode on military patrols and even translated for them.  While there, she also taught Marine units on Arab culture and Islam.

Due to her knowledge in international affairs, the US Marine Corps hired her as a SME, a subject matter expert, at their operational culture center in Quantico, VA.   While there, she trained thousands of U.S. service members on operational culture(s) before their overseas deployments.

Barbara and her husband, Tim Kennedy, are NHA life members.  Barbara’s uncle, Wilson “Brownie” Brownell, was one of the founding members of NHA; he was also responsible for introducing Barbara and Tim to a plant-based diet and the organization.

Contact Barbara Back to Board Members
Posts by this Expert
Welcome to the new home of the National Health Association!
If you are an existing member, you will need to reset your password in order to log in and take advantage of all the great benefits being a member provides—which now includes the ability to update your own contact information (address, phone number, email, upload a picture and much more). Please start by clicking the Register/Log In button and follow the instructions on that page. Once your password is reset, you will use your email address as your username. You no longer have or need a Member Number. Please contact us if you have questions—and thanks for your support!