Fall in love with salads again with this easy, delicious dressing. (If you add the balsamic, try my favorite brand, California Balsamic.)

For a balsamic tahini dill, add 4 tablespoons of balsamic vinegar

1. Place all of the ingredients into a blender and blend until smooth. 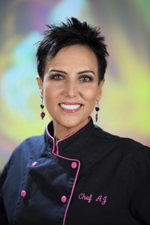 Chef AJ has been devoted to a plant-based diet for almost 40 years, and is proud to say that her IQ is higher than her cholesterol. She is the host of the television series Healthy Living with Chef AJ, which airs on Foody TV, and also hosts a weekly podcast of the same name. As a comedienne as well as a chef, she has made appearances on The Tonight Show Starring Johnny Carson, The Tonight Show with Jay Leno, and The Late Show with David Letterman. She is the author of the popular books The Secrets to Ultimate Weight Loss: A Revolutionary Approach to Conquer Cravings, Overcome Food Addiction and Lose Weight Without Going Hungry, and Unprocessed, the co-producer of Healthy Taste of L.A., and the creator of the Ultimate Weight Loss Program, which has helped hundreds of people achieve the health and body they deserve. Chef AJ was also the executive pastry chef at Santé Restaurant in Los Angeles, where she was famous for her sugar-, oil-, salt- and gluten-free desserts, which used the fruit, the whole fruit, and nothing but the whole fruit. Chef AJ holds a certificate in Plant-Based Nutrition from eCornell University and is a member of the American College of Lifestyle Medicine.