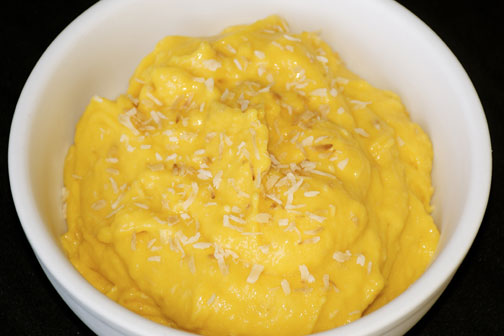 1. Take your frozen mangoes and bananas out of the freezer and leave them out at room temperature for 5 minutes (this will soften them a bit so you don’t overwork your blender).

2. Using a high-speed blender and the tamper, blend the mango, banana and coconut milk until it reaches a soft-serve consistency.

Ramses Bravo is the executive chef at TrueNorth Health Center in Santa Rosa, California and the author of the cookbook, Bravo! He came from working in hotel and restaurant kitchens where butter, cream, meat and pizza flowed freely; so taking the job at TrueNorth was unfamiliar territory. But after he adopted the diet himself, he quickly dropped 30 pounds without even trying, and also had a lot more energy and desire to play with his daughter, Lulu. When asked what he loves most about working at TrueNorth, he said, “That I have been able to embrace my role as a cooking teacher. I teach adults across the country about healthy food, and I also teach children at my daughter’s school how to cook.” Chef Bravo’s hobbies include photography, writing, human behavior, knitting, football, and making jewelry with his daughter.